NLO: Waziri, Samson Scored As 36 Lion Truimph Over Juvenile Fc
36 Lion earned 3-0 home win over Juvenile Fc in the ongoing Nationwide League One (NLO) at Onikan Waterfront Stadium on thursday.
36 Lion Fc made a bright start to the game, putting their opponents under immense pressure in the first half of the match.
Waziri Innocent registered his goal at 12th minute while Akinyoola Samson book his name on the score-sheet for the Lions in the 31st minutes. The Lions got a penalty a minute before the end of first half, Juvenile FC walk off the field and refuse to allow the spot kick. Few minutes later the centre referee signalled end of first half.
The second stanza of the game, the centre referee sound­ed the final whistle to end the game, 15 minutes after the away team refuse to resume the other half of the game. Information got to us that they did that so as not to conceive more goals.
Despite the victory , 36 Lion sit in second position on the log with 12 points. 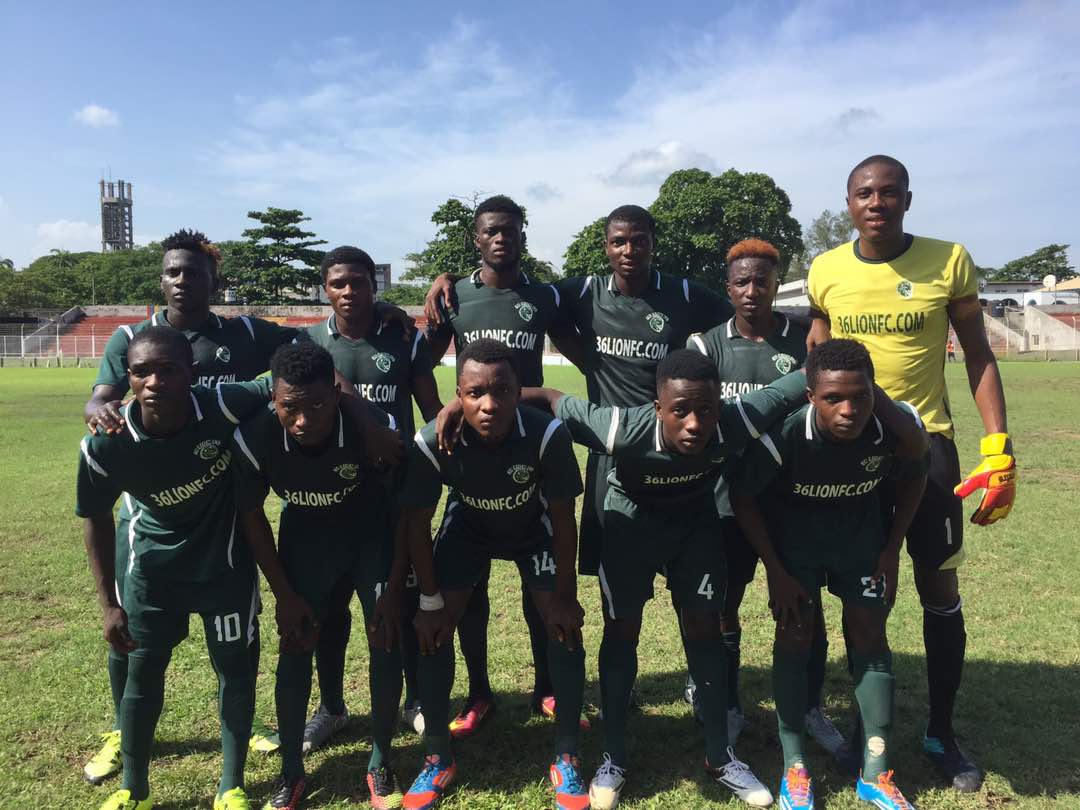 Tijani Strike Gives 36 Lion Vital Win Over MFM Fc. 36 Lion scraped a 1-0 away win over MFM Feeders Fc in the ongoing Nationwide League One (NLO) in agege to move out of the relegation pack. Both teams dominated the opening half hour of the game as Ojo Sunkanmi commanded things in the middle of the park. 36 Lion fans had reasons to jubilate on 36 minutes, when Inibong Solomon set-up a perfect cross that was nodded home by Tijani Muhammed. It was a strike that left the goalie rooted to the spot. The second stanza of the game commenced with similar tempo like the first period, but the Lions were more crafty and attacking minded. Speaking immediately after the victory, 36 Lion gaffer Akinrele Francis shower praise on his players. "MFM are a good side and for us to beat them, I told my players before the match to raise their game beyond 100% which they perfect well. We are still hopeful of finishing the league well". " We have a good team and I'm confident of my players that we can achieve better things," he said. The win puts 36 Lion in 4th position on the league table, having garnered 9points from seven matches? 36 Lion will welcome Juvenile Fc in the final fixture of the league at Onikan Stadium this thursday.

NLO: Lokosa scores Hat-Trick as 36 Lion thrash Ekiti United
Striker Anthony Lokosa scored his first hat-trick of the 2016/17 Nationwide League One (NLO) season as 36 Lion Football Club thrashed visiting Ekiti United 5-1 in their Week four fixtures at Onikan Waterfront Stadium, Lagos.
Lokosa registered his hat-trick in the 4th, 22nd and 30th minutes respectively, while Ajani Adegbola and Akinyoola Samson also put their names on the score-sheet for the Lions at 48th and 70th minutes respectively.
36 Lion coach Akinrele Francis express his satisfaction after his side got a vital winning.
"The point we got here serves as a turning point for us and it will motivate us going into our next game in the second round of the league."
Despite the victory , 36 Lion still sit in fifth position on the log with 3 points from four NLO matches.
#WeAreLions
#UP36!!!
#UPLION!!!! 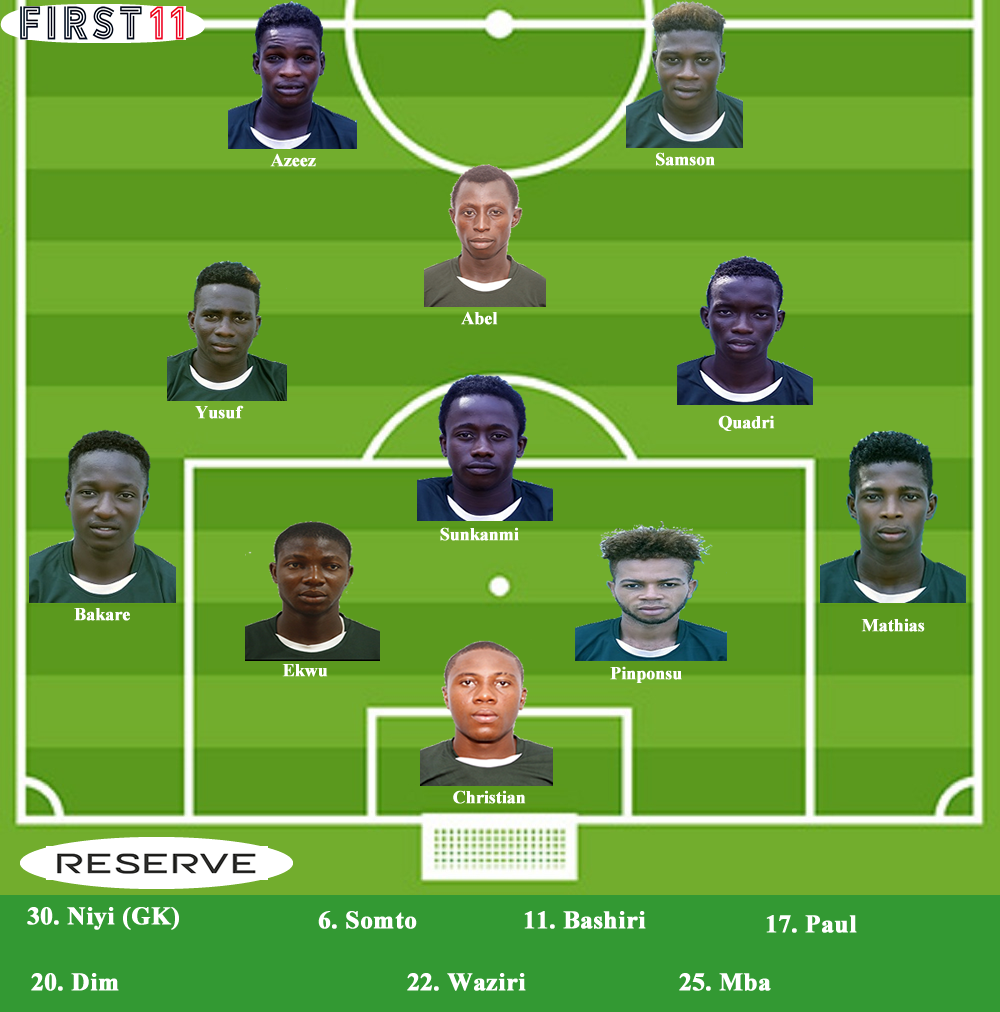 36 Lion Fc Vs Femmak Fc
36 Lion lost out on penalties by 8-7 to Femmak Fc after a goalless draw on Today at the Agege Township Stadium in the ongoing Lagos F.A Cup 2017.
36 Lion Fc made a bright start to the game, putting their opponents under immense pressure from the first minutes of the match.
After thirty minutes, Both sides adopted a cautious approach to end the first half, the two teams created several scoring opportunities but staunch defenders from either side refuse to bulge, ends first half ended goalless.
At the resumption of the second half, 36 Lion popped up the volume as they ask too many questions but the Femmak Fc defenders were ever business like.
It was however a topsy-turvy game throughout the second half as both sides tried to score a goal, but the goal refuse to come.
The centre referee sound­ed the final whistle to end the game at 0-0 in the 90 minute, forcing the en­counter to be decided by a penal­ty shootout.
36 Lion Fc Coach Akinrele Francis extol praise on his boys for putting up a good fight, adding that the lottery of the penalties is always anybody's game.
"It is one of those things in the game of football. When it comes to a situation like this, anybody can win and it is quite unfortunate that we lost.
However, I still praise my boys for showing strength and character during the game.'' he said.
Now we go back to the drawing board and get ready for the nationwide league one, we have to really work on our attackers, we will score, we win

We engaged in a friendly match today with Pacers United FC of Ajah as part of the preparation for our upcoming Nationwide League One. We started the game with majority of our team B boys so as to sharpen them for the task ahead and the first half ended goalless.
Our regular eleven came on the pitch, second half and got the first goal within two minutes through the bullish penetration of Yusuf Lawal, and it was 1-0 game on. The Pacers responded like a well taught side, got a penalty that was converted superbly, and it was 1-1 game on. Our boys kept them at bay for another twenty minutes, but we were just too wasteful and refuse to put any ball behind Pacers United hardworking goal keeper. A counter attack and a perfect pocket pass from Pacers United's substitute midfielder, put their attacker in a wonderful position to slot one underneath our goal keeper from six-yard out. Now, it's 2-1 game on. Our Lions continue to ask Pacers United's boys different questions from different angle, until a sublime cross from Samson placed Quadri on a one-on-one situation in the six-yard box which left the Pacers United hardworking goal keeper no choice but to clip him and it was a penalty converted by our captain, Junior Pinponsu.
The game ended four minutes later.
Very entertaining game it was as all the spectators were trilled.
Our next friendly game is VS Olisa FC in Ogun state at the Dipo Dina Stadium, Ijebu-Ode, 7:00am kickoff, on Thursday, March 16, 2017. We will also play Imperial Academy the next day, which is Friday, March 17, 2017, same time.
Up 36! Up Lions!